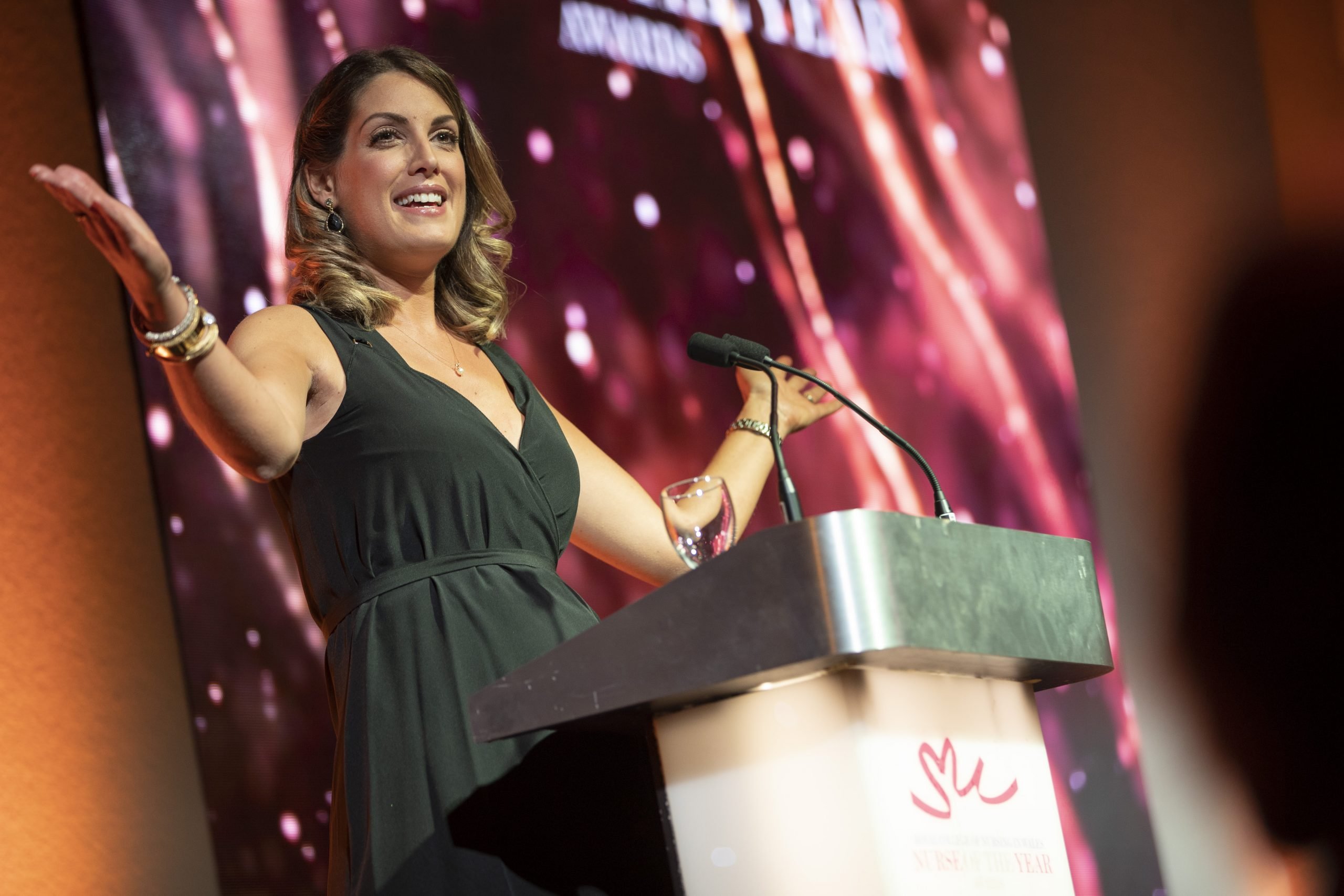 Andrea Byrne is one of the faces of ITV News. She anchors the BAFTA award-winning daily news programme Wales at Six and ITV national bulletins. This has included ITV Weekend News, Lunchtime News, Evening News and News at Ten.

Andrea presents Crime Files on ITV Wales, and the current affairs programme Wales This Week, where her journalism has focused on social issues such as homelessness, poverty and mental health.

Andrea has worked extensively with the armed forces. She was nominated for an RTS award for a series behind-the-scenes with Chinook helicopter crews deploying to Afghanistan. Prince Harry is among the many high-profile names she has interviewed.

She is an Ambassador for the Duke of Edinburgh’s Award Scheme and a Trustee for Believe Organ Donor Support.

Andrea is an experienced host, speaker and moderator at a range of conferences, award ceremonies and dinners. Her topics include her career in journalism, the health service, maternity issues and life as a so-called rugby WAG – she is married to former Wales rugby international Lee Byrne. They have a baby daughter, Jemima. Andrea is also a writer and voice-over artist.

Andrea is an inspiring speaker, who engages her audiences through being authentic, articulate and compelling. She captivated the room when delivering a keynote speech at one of our Women in PR Cymru events. The stories she told about her career experiences, and her personal reflections, were both honest and entertaining. We received fantastic feedback from delegates who were all totally drawn to her warmth and approachable style.

Crime investigator – News Reader – Journalist – mother – wife and ITV wales Newsreader – Andrea provides a wonderful Insight into the world of crimes and current affairs . Are used Andrea for a lunchtime event and an after dinner speaker for the rugby club so whoever is managing to cross the spectrum from 60+ ladies who were meeting at lunch And also after dinner – Andrea got a wonderful reception from both & I will definitely book amber again when I’m next back in the chair!

Andrea spoke at the first Women in PR Cymru event, at an Inaugural Media lunch and she was fantastic.

She talked candidly about her career as a broadcast journalist, sharing stories and talking about the importance of honest and truthful reporting. We had great feedback from the audience about Andrea’s speech including how she was feeling about her return to work as a first time mum. Women in PR Cymru cannot thank Andrea enough for setting the tone for our future events and we would have her back without hesitation. The ultimate professional and a true advocate for Women in PR.

I had the privilege of working with Andrea in developing local TV News and “live”magazine shows, Andrea is a first class presenter and I knew that we were always going to be a small stepping stone in the career of someone so talented.

The Institute of Directors (IoD) in Wales’ annual “flagship” event is our awards ceremony which typically sees over 400 business leaders attending to celebrate the achievements of Directors in all sectors from all parts of Wales.

Andrea has hosted this prestigious event on many occasions with absolute professionalism, style and panache. It is always a joy to work with her!

Andrea is a fantastic host. She has co-presented the RCN Wales Nurse of The Year on an annual basis in Cardiff City Hall. This is a Wales-wide high profile event and she has been instrumental in ensuring a professional and engaging atmosphere. Everyone enjoys this celebratory event – so much so that she has also hosted the RCN Leadership event where Nurse leaders from across Wales come together to debate serious and contentious issues alongside innovation. Andrea manages to keep the audience and presenters engaged. Andrea is the consummate professional presenter – full of humour and compassion …. loved having her at our events.

Andrea has worked for me on a number of awards events and has always done a great job and is a joy to work with. Always professional but has time for everyone on the night and I would not hesitate to recommend her if you are looking for any awards hosts for your events.

I’ve been fortunate enough to work with Andrea in a variety of different roles. I would very much recommend her highly engaging and professional approach to all areas of her work but specifically event compering.

Andrea’s willingness to help, plus her understanding of our background in setting up Trust PA in memory of our son Paul-Andre (P-A) has been really heart warming for us.

Andrea’s figurative support and calm professionalism has enabled us to reach a wider audience. This has also raised vital funds to support & continue our quest; to help fund the development of effective treatments. Thank you Andrea, we really value your kindness, generous personal support and valuable contribution.